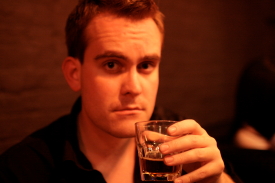 Bringing Nothing to the Party is a truly funny book. Part history, part memoir, it’s also a brilliant and hilarious piece of journalism. Nerdy wunderkind Paul Carr lands a multi-book deal at the age of 19. This early success leads to a job at The Guardian, writing their new media column, which in turn gives him instant access to London’s most successful Internet entrepreneurs, a wild, ambitious, hard-drinking bunch. For the next few years, Carr attends their parties, conferences, launches, and networking events, always impressed and more than a little annoyed that younger, less intelligent people are able to make millions overnight. All it takes, he figures, is one good idea and a little perseverance.

At the age of 25, Carr decides it’s time to get a piece of the action. His goal: to achieve the same kind of instant fame, acclaim and riches. Armed with his one idea, Carr pursues capital, assembles a staff, organises publicity, works long hours and—outrageously—fails.

Carr’s personal quest is set within the fast-paced, super-hyped culture of New Media, in which luck and timing prove to be more critical than the good idea. His stories touch on how Google got its name, the ‘Jennicam’ (which launched a thousand reality TV shows), cases of cyber-extortion, Google bombs, selling pixels, and the rise of social networks. Peppered with buzzing adjectives and laugh-a-minute anecdotes, Bringing Nothing to the Party is a highly readable textbook on what to do and what not to do in the world of Internet start-ups.