Reading: Patrick White–Save Me! Save Me? 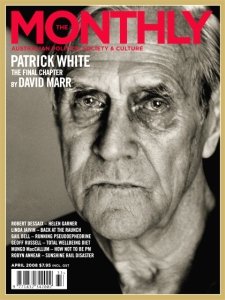 On a recent Thursday evening, my husband, my children and I became Australian citizens. The decision was largely administrative. Our passports are about to expire, which makes our permanent residency visas invalid unless we renew them as well. The paperwork, the fees, and the time required to renew a residency visa is much the same as applying for citizenship. It was a decision we came to unemotionally. Nevertheless, most friends have interjected a strand of emotionalism for us: “Why now and not two years ago?” they asked. “Has something happened?” “Do you feel like a traitor to your own country?” “You must really love it here.”

And then the ceremony. My daughters wore new dresses, my son a white dress shirt. We arrived fresh and excited, hoping we had the right time, the right papers, not knowing what to expect. The Pine Rivers Shire Community Centre was brimming. While we waited my son counted the rows and multiplied. He came up with 500. Were so many really going to become Australians that night? As it turned out, there were 148 of us. The rest of the crowd was made up of family members, friends, well-wishers. There was a high school band and a bush poet to entertain and speeches by several council members to give the event the required seriousness. As our names were called, each of us rose, shook hands with the mayor, and posed for pictures. We were given a certificate of citizenship and a native tree to plant in our gardens.

It was a three-hour ceremony, a long time for children to sit quietly. As the names were called, one by one, I found myself growing more and more emotional. I felt a surge of good will as the bush poet, Wally ‘The Bear’ Finch, recited his poem about Christmas down under, and the one about his Uncle Charlie, who came out to Australia after the war, and became an Australian by choice. My voice wavered as we made a pledge to be good Australian citizens. At the end, we sang the national anthem. My husband and I clutched at a sheet with the lyrics written out. I marveled that my children knew all the words. It’s one of those things, I thought, that you learn without trying at weekly school assemblies, something I would never have.

Wow. I’m an Australian. In the space of three hours, something administrative was transformed into something personal and important. I am struck with a new sense of responsibility.

Now, I thought, there can be no excuses for the holes in my head. Although I’ve spent the last few years avidly reading as much contemporary Australian literature as possible, when it comes to the earlier stuff—the work of 50, 100, 150 years ago—I’m a blank. Nothing can make up for not having gone to school here, where the national literature is alternately drilled into one or—like the national anthem—absorbed by osmosis. Even those Australians who didn’t go on to University have read Henry Lawson, Miles Franklin, Patrick White. Nothing quite gives the flavour of a place like a nation’s literature, and Australian literature, as of last Thursday, is officially mine. I feel a strong responsibility to consume it, to understand the sweep of it, to somehow make it my own.

So the morning after the ceremony, instead of planting my native tree, I drove to a bookstore. My goal was to find the first volume that would begin fill those holes. I didn’t go to one of those bookstores you find in a shopping mall, filled with mysteries, romances and thrillers. I headed to one of those groovy bookstores in the trendy part of town, where they regularly hold book launches and chats with authors. Still, I was surprised by what I found. No Christina Stead. No Henry Lawson. Only one Patrick White.

It was The Aunt’s Story. I read the back cover: …Middle-aged Theodora Goodman contemplates the desert of her life. Freed from the trammels of convention she leaves Australia for a European tour and becomes involved with the residents of a small French hotel. But creating other people’s lives, even in love and pity, can lead to madness… Freedom from convention, creating lives, love, pity, madness: just the kind of thing I like. I tucked the book under my arm. Later that afternoon, I experienced the surprise one feels with the first stirrings of love. A tremor. Wonder. Agitation. Joy.

With some trepidation (mostly because I wanted to keep my secret to myself for a while longer yet), I summoned the courage to confess my newest passion to a friend, a man a dozen years or so older than me, whose mind and taste I admire above all others. He is someone who has supported my writing from the beginning, and who over the last few years has become something of a muse. With his open face and understanding eyes, he told me that Patrick White is a writer you either love or hate—leaving me to guess which it was for him. Later though when I grew more effusive, admitting that I knew I admired White’s style because there was so much I wanted to scrape off the page and slip into my pocket, my friend groaned. He shot me a worried glance. Like an over-protective male relative, he put a warning hand on my arm and said, “You are not to be influenced by him. Promise me.”

Stubbornly, I persisted. But because I respected my friend’s opinion, I began to read White differently. My friend had said, “There’s something about the way he writes that keeps me from getting into his books.” What is it? I wondered. It’s true that White is stylistically difficult. You don’t exactly sail along swiftly, carried by the winds and currents of big ideas. His work is smaller and more mannered than that, denser, more nuanced. Pieces are missing, while other bits, minor things, are emphasized. It reminded me of poetry—T.S. Eliot maybe? As I read more, I began to rearrange White’s words on the page, turning sentences and phrases into lines, paragraphs into stanzas. It’s a distracting way to read, it’s true, but the expectation of ease dissolved. I felt more prepared to work for comprehension in the same way I do when I read poetry.

A few days later on a trip to Melbourne, I was invited to a dinner party. Celebrating with paella and good champagne, the party turned out to be a lively girls’ night in. At one point, a bit shy, but freed by the flow of champagne, with the sparkle and hushed tones that accompany a confession by one woman to others, I mentioned my latest infatuation. I suppose I was looking for support of the kind that only women can give.

The group, made up of feisty, intelligent, articulate, outspoken women, tore into the subject.

“His writing is overworked and decadent.”

“There are so many better Australian writers.”

These were women—true girlfriends—coming together to protect a naïve sister from misjudgment, faulty thinking, possible heartache. I left with a list of ‘required reading’ tucked in my pocket and an armload of books from my hostess’s library.

This reminded me. I attended a festival lately which had a session entitled, “Classics of Australian Literature: The Books We Should Have Read”. I waded through the pages of my notebook until I found it in my notes. There wasn’t a lot of overlap, and some were contemporary: Kate Grenville, Marcus Clarke, Murray Bail, Henry Lawson, Jessica Anderson, Peter Carey, Andrew McGahan, Christina Stead. And, yes, at last, Patrick White.

At the local library, I looked on the shelves for any book by Patrick White. Nothing. Is there a biography? I wondered. In the biography section, I found the inevitable Posh and Becks and other tell-alls: everything you ever wanted to know about Madonna, Princess Diana, Jacqueline Onassis. Nothing, however, on White.

I wandered. In the next aisle, there were a couple of shelves dedicated to ‘literature’. Henry Lawson, Judith Wright, Charmian Clift, (of whom I knew from a recent Radio National reading of her writings) and a variety of bush poets. There were plays, but none by White. It was here I found a collection of essays by Helen Garner, including one in which she enthusiastically reviews David Marr’s biography of White. (So there is a biography, a “grand and gorgeous book” according to Garner.) But there was nothing by White himself. I learned from the Garner essay that The Aunt’s Tale, White’s favorite among his novels, had been badly received, which was a source of great bitterness to him.

Feeling frustrated, both by White’s complex reputation and his general unavailability, I returned to the bookstore to order The Tree of Man and Marr’s biography.

A few days later, a dear friend, the man who was responsible for bringing us to Australia in the first place, held a ‘citizenship’ party for us. While the kids swam and played ping-pong, we spoke about politics, about voting and native trees and bush poetry. Because it was primarily a theatrical crowd, we even ended the evening by singing the National Anthem and Waltzing Matilda to much giggling flag-waving by the children. Over dinner I happened to be sitting near a fascinating older woman, an actor, whose first professional job, I discovered, was a role in one of Patrick White’s plays.

“Patrick White? He’s Australia’s premier literary figure. I spoke with him once, you know, just before his death. I saw him in the foyer of a theatre during the interval. I went up to him and said, ‘I know who you are.’ It might have gone either way. He was known to be a difficult man. A misogynist. But he was pleasant enough to me. We spent ten minutes or so speaking about the play we were seeing. His novels are good, Voss probably the best. But his plays are inaccessible. Stylistically difficult, the way Beckett’s and Shaw’s plays are difficult.”

I told her that although I’d only read one of his novels so far, I admired him. I must have hesitated, and she must have picked up on my insecurity, because the next moment she leaned over, put her arm around me and whispered encouragingly, “Then you must read more. You only go around once, don’t hold back, get right in there, go after what you want. Live, read, love.”

She’s right. At this stage in my life, I’m not interested in a shallow affair. I want the real thing. The real thing with all its controversy and heat and sharp edges. This is about my relationship with the literature of my adopted country. I don’t want to be saved.  By Adair Jones.