From a lost notebook….the lonely dance of Ruby rube 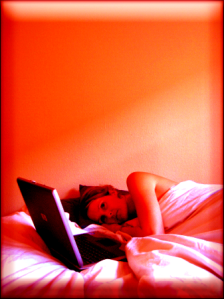 She’s silenced by the distance of one computer connected to another, not directly with cables and wires but by unseen forces she can’t understand.Not solid, like the movement of limbs powered by muscle and bone, but a mystery guided by invisible forces. Electrons sent one by one, meaningless bits of on and off, of light, of energy.These cannot be seen with the naked eye or heard or felt.They can pass through one magically, something she’s never questioned before.

But now.  She sees that these tiny pieces of information mean nothing except at their point of origin and their ultimate destination. They go about their journey through so many way stations, through so many transfers, alighting in queues, passing by other fragments of information made up utterly of the same ons and the same offs, the same energy, the same electrons and protons, the same atoms; each message going its own way, following its own direction, to swell some heart or break it.

She has some glimmer then, as she reads the words again on the cold screen, that her joy was  mostly made up, conjured from distance and drama as much as from desire. The different continents, different time zones, his other attachments, these obstacles had made it  more exciting and more glamorous.

They were star-crossed. They had mountains to climb. They needed to walk through fire to prove their love. It would be a long, hard road, but they’d get there. These had been her thoughts.

Now this. It was all  make-believe.   She made him up.

Ruby counts on her fingers the months she’s known him, numbers the days and nights they spent together.Not many after all, when you get right down to it.

She wishes for something solid to grab onto.A fact apart from this harsh email that seems to have arrived in her apartment from the coldest reaches of outer space, something to show her what they shared had indeed been real.

She reminds herself that if she wanted to, she could sort her inbox and count the number of messages from him. She could easily reread the text messages he’s sent. She saved them all. She could take out her phone bills and count the times she called him, add up the minutes they spoke, long distance across the ocean.

Curled up on the daybed, she hugs a pillow. She’s hollow, gouged out, nothing but an empty husk. He doesn’t love her.  There will be no dance.