Review: This Book is Not Good for You by Pseudonymous Bosch 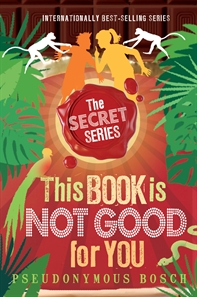 This Book is Not Good for You is the third puzzle-filled book in The Secret Series, in which Cass and Max-Ernest, two brave 11-year olds, set out to fulfill some very perplexing—and dangerous—missions.

What’s the ‘secret’ this time?  I’m not allowed to tell, but it has to do with the most delicious chocolate in the entire world.  And it gets better from there.  Once her suspicions are aroused, Cass discovers the dastardly Ms. Mauvais is masquerading as a nun—running an orphanage no less.  The other members of the villainous gang, the Midnight Sun, are hiding out on a plantation in Africa.  And the evil dessert chef, Señor Hugo, has kidnapped Cass’s mother.  He’s asking for an unusual ransom, something highly sought after but rarely ever seen.

Added to the adventures is a gaggle of chocolate-making monkeys, some ferocious lions, and even a magical bird.  The key to everything, however, is a cursed Aztec tuning fork, an object with the power to recreate any flavour the user has ever tasted.  With no time to waste, Cass and Max-Ernest are off; and, of course, they learn a few things along the way.

Young readers familiar with the series will recognise the zany narrator, who regularly breaks away from the story to comment on the action (as well as many other things). This intrusive voice, far from being distracting, serves to heighten both the story’s drama and its sheer fun.

Pseudonymous Bosch has created another rollicking mystery—fast-paced, quirky and, best of all, light-hearted.  It’s the kind of story children won’t want to end.  And Bosch is prepared for this:  he’s added a bonus list his favourite chocolate recipes.  Delicious.

This Book is Not Good for You, Pseudonymous Bosch, Allen and Unwin.