Review: Together Alone by Jeff Apter 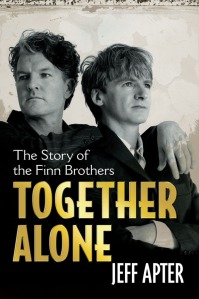 It was 1979.  Out late on a school night, a teenage Jeff Apter found himself in Sydney’s grungy Pitt Street Gardens in his first encounter with the Split Enz, a New Zealand band that featured rising talent in a pair of brothers: Tim and Neil Finn.  In Apter’s words, “it was as if each member of the band had rubbed up against a live electrical wire…impossible to tell if they were laughing, crying or sneering.”

The brothers had enjoyed a middle class upbringing in New Zealand, far from London where the Beatles were making history. A passion for music took hold of Tim Finn early on; Neil, who was eight years younger, idolised Tim and quietly followed his example.  Split Enz was Tim’s band; Neil was its staunchest supporter.  After struggling for many years and needing a new band member in a pinch, someone suggested Neil, an idea neither brother had considered up to then.  It was just what the band needed.

The Split Enz went on to international acclaim, and Apter developed his love of rock and roll into a proper career, working as a journalist for Rolling Stone and Vogue and writing on popular culture for more than 20 years.  There could be no better biographer for the story of the Brothers Finn.  In fact, it’s Apter’s encyclopedic knowledge of rock and roll history combined with his punchy prose that makes Together Alone such compelling reading.

Inevitably, the years took their toll on the band, leading to rivalry, breakdowns, creative differences. Through it all, however, the brothers managed to do what they’d always done: make music and challenge fans—either together or alone—in search of the popular song.

Together Alone: The Story of the Finn Brothers, Jeff Apter, Random House.

Review first appeared in the Courier-Mail in June 2010.