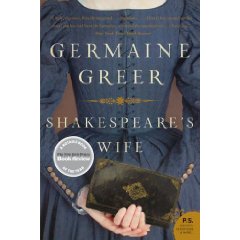 In 2007, Germaine Greer published the spirited Shakespeare’s Wife, a book about Ann Hathaway and the life she might have led.  The word ‘might’ is important in this context, because next to nothing is known about her.  There are a few documents that offer a detail or two about her family.  There are Mr Shakespeare’s poems and plays, of course, which must not be read as being too heavily autobiographical.  And there are the successive, generally negative views of scholars and historians.  That’s all.

Greer wades though everything.  Everything.  At the heart of her investigation is the simplest question: Why, when so little is known, should nearly every reference to this woman be negative?

For example, for four centuries Ann Hathaway has been considered an illiterate, unattractive older woman who slyly set about to lead astray and then entrap the naïve, teenage Will, future bard of England.  And yet no image exists as to whether she was lovely or plain or downright ugly. The only thing known for certain is that Ann Hathaway was 26 to his 18 years.  That’s it.

Nothing about their courtship is known, though Greer draws context from songs and ballads of the time as well as some of Shakespeare’s early poems, which are surprisingly positive about relationships between slightly older women and younger men. She makes a case for the Hathaways being better established in the world than the Shakespeares, who were heavily in debt.  Indeed, it might be surmised that Ann was, in fact, a good catch for the talented young man without an income, whose skills as a poet and playwright remained, at the age of 18, largely untested.  No one could have imagined at the time they were married that Will Shakespeare would go on to be the most celebrated writer in the English language.

What, then, have these scholars to gain by being unceasingly unkind to someone they know nothing about?  Greer invokes the long line of so-called ‘rhapsodists of bardolatry’, of whom Thomas De Quincey was first of many.  Others include: Samuel Johnson, Samuel Taylor Coleridge, John Keats, William Hazlitt, and Thomas Carlyle. Historians and scholars weighed in: Shakespeare’s genius is unsurpassed.  By the early 19th Century, he had become a national treasure and, as such, the facts of his life as the basis of an ‘image’ were considered public property.  Idols, however, have their opposing demons.  And it appears that Shakespeare’s wife has been cast in such a role.

Greer intends to set the record straight, questioning each document, every reference, and each individual assumption at a breakneck pace, exposing in the process a long tradition of scholarly chauvinism and misogyny.

Ann Hathaway has existed too long as another silenced woman:  Greer seeks to restore her reputation, the barest facts of her life, her face, her voice.  Since facts about her life are so scarce, Shakespeare’s Wife is a an odd kind of biography.  Greer paints an exhaustive picture of Elizabethan life and, in the accumulation of detail and the intrepid questioning she is famous for, she gives an alternate view of a woman who has perhaps been unfairly maligned for centuries.

This is intoxicating reading.  Bravo, Greer.