In search of monsters in literature 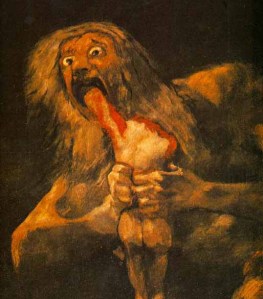 In search of monsters in literature

The monsters that appear on this list are significant to Western culture, influencing our childhood nightmares, standing in for social ills and sexual anxieties, representing the wayward creative process, and lending to our understanding of the dark side of human nature.  Through the human process of splitting off what we fear and projecting it onto something in the outside world, we are momentarily relieved.  However, once unleashed, the monster is no longer easily suppressed, takes on a life of its own, becomes uncontrollable and, therefore, all the  more powerful.

The Illiad, Homer, 8th century BC

Homer describes the chimera as “a thing of immortal make, not human, lion-fronted and snake behind, a goat in the middle, and snorting out the breath of the terrible flame of bright fire”.  Over centuries, it has come to mean “any vain, foolish, or incongruous fancy, or creature of the imagination”.

…She was very lovely once, the hope of many

An envoius suitor, and of all her beauties

Her hair was most beautiful–at least I heard so

From one who claimed he had seen her.  One day Neptune

Found her and raped her, in Minerva’s temple,

And the goddess turned away, and hid her eyes

Behind her shield, and, punishing the outrage

As it deserved, she changed her hair to serpents,

And even now, to frighten evildoers,

She carries on her breastplate metal vipers

To serve as awful warning of her vengeance.

Book of Revelation of St John the Divine, around 95 AD

1. And there appeared another wonder in heaven; and behold a great red dragon, having seven heads and ten horns, and seven crowns upon his heads. (Revelation 12:3)

2. And I stood upon the sand of the sea, and saw a beast rise out of the sea, having seven heads and ten horns, and upon his horns ten crowns, and upon his heads the name of blasphemy. And the beast which I saw was like unto a leopard, and his feet were as the feet of a bear, and his mouth as the mouth of a lion; and the dragon gave him his power, and his seat, and great authority. (Revelation 13:1, 2)

3. So he carried me away in the spirit unto the Wilderness: and I saw a woman sit upon a scarlet coloured beast, full of names of blasphemy, having seven heads and ten horns. (Revelation 17:3)

What any of this might mean has been subject to centuries of wild speculation and made to serve political, religious and ideological purposes.

Grendel spends his time terrorizing the people of Denmark, devouring thirty or more men at a time, until a Swedish hero named Beowulf take it upon himself to test his strength against him.  In the spirit of Anglo-Saxon epic poetry, Beowulf defeats the monster through cunning and ability.

All too often, when one monster is conquered, another arises to take its place. Grendel’s more fearsome mother arrives for revenge.  Beowulf fights and, after a protracted battle in a swamp, kills her too.

Iago is no supernatural monster, but one more insidious.  He is perhaps the first literary example of what we’ve come to identify as the ‘socio-path’, in other words, the enemy among us.  Throughout the play, Iago manipulates the emotions, insecurities, and behaviours of the characters to his own purposes, bringing tragedy to all. 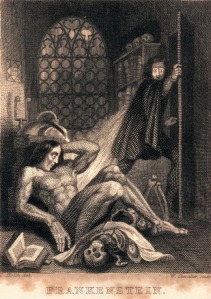 Inspired by a dream, Mary Shelley’s story has come to represent the dangers of scientific ambition and intellectual hubris.  But it’s impossible to read Shelley’s story without acknowledging her early experience of pregnancy and stillbirth.  In a diary entry for March 19, 1915, the 17-year old Shelley records the loss of her first baby, a little girl: “Dream that my little baby came to life again, that it had only been cold, and that we rubbed it before the fire, and it lived. Awake and find no baby.” An experience not far from Victor Frankenstein’s expressed desire: “I thought, that if I could bestow animation upon lifeless matter, I might in process of time renew life where death had apparently devoted the body to corruption.”

While many see Jane Eyre as a Victorian rags to riches tale, it’s actually something much more psychologically rich. Charlotte Bronte works through her ambivalence about the roles forced on women in mid-nineteenth century England. There is the experience of Bertha Antoinette, the madwoman in the attic, who is officially married to the Byronic hero, Mr Rochester.  She is demonised for her Creole origins, her sensuality, her other-ness.  On the surface of the story, Bertha is the novel’s monster; but when considered more deeply, it is her loss of  name, family, culture, and country that sets the course for her madness.  It is Mr Rochester who has taken this identity away from her—the exact thing he hopes to do to poor, plain, sensible Jane Eyre.  She resists where Bertha has succumbed.

When Rochester rushes into his flaming house to save Bertha, who has set the fire, it is his first act of authentic heroism, something that transforms him from ‘Byronic hero’ to actual hero.  He is injured, partially blinded, made disfigured—the inner monster appearing now on the exterior.  In death, Bertha is freed at last from her role as monster.  And Jane is now free to return to Thornfield in such a way as to retain her identity and independence and to marry Rochester as an equal partner. 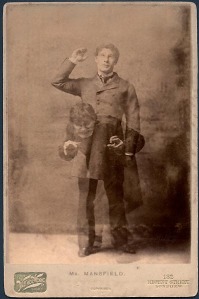 Mr Hyde is another type of interior monster.  While Mr Rochester is a kind of social construct—the preeminent male, the spoiled son, the Byronic hero as celebrated in novels—Mr Hyde reflects the war between good and evil each of us must wage within our own hearts. Are we to  be just and honorable, possessed of integrity?  Or are we to succumb to baser instincts?

The good Dr Jekyll develops an antidote to protect from his evil side, but it gradually loses its power to quell the monster within.  In one final moment of sanity, the good Dr Jekyll commits suicide.

The hero Jonathon Harker is simultaneously terrified by and stricken with desire for three vampire women who try to suck his blood and hold him captive.  At the same time, Dracula bites and ritually penetrates Harker’s fiancee’s friend Lucy, turning her from a pure, Vicorian lady into a creature of ‘voluptuous wantonness’.

Written in the middle of the most violent century on record and at the onset of the Cold War, 1984 warns of totalitarian governments, invisible systems of control, and the intrusion of technology in everyday life.

Lord of the Flies, William Golding, 1954

A group of  boys are shipwrecked on an island believed to be inhabited by a ‘beast’. They leave this beast a pig’s head as an offering, which soon swarms with flies. Around this time, one of the group finds a dead parachutist hanging from a tree. The pig’s head and the dead parachutist conflate in the minds of the increasingly superstitious boys.  A primal dance leads to the murder of the one boy who recognises that ‘the beast’ is actually their own creation, fear made external. 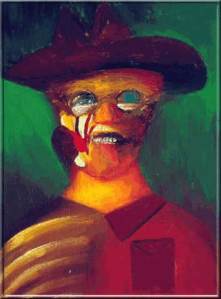 In a parallel to the Ern Malley affair, the second-rate poet, Christopher Chubb, in frustration at continuous rejections, creates the character of Bob McCorkle, complete with a birth certificate and a portrait cobbled together from other photographs.  He also fabricates a long poem, ‘ The Darkening Ecliptic’, a mosaic of  bits of prose and verse.  He sends it off to David Weiss the editor of a poetry magazine Personae. There is a furore over the poem’s ‘brilliance’, but because of some of the material, Weiss is put on trial for obscenity. As the trial progresses, it’s interrupted by a man claiming to be the real Bob McCorkle. Knowing the character of Bob McCorkle is a fiction, Chubb assumes this man is a lunatic who has assumed the McCorkle persona for some unknown, and probably insane, reason.

This new Bob McCorkle is the equivalent of the Frankenstein monster, wreaking revenge on society once he’s unleashed. He becomes Chubb’s tormentor, seeking to flesh out the remainder of his reality at Chubb’s expense. As his creator, McCorkle feels that Chubb must provide everything necessary for his existence and even steals facets of Chubb’s life from him.