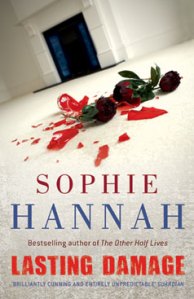 Connie Bowskill is obsessed with a house in Cambridge that has just been put up for sale. Late one evening, she waits for her husband Kit to fall asleep, creeps into their study, and checks it out on a real estate database. Taking a virtual tour, she clicks on an image of the lounge room and is stunned to see a woman lying in a pool of blood. When Kit, responding to her hysteria, clicks on the same image, the woman is gone. The lounge room is exactly the same, but pristine—there’s no body, no pool of blood. The police can’t reproduce the image. The real estate agency is bewildered. And the lounge room of the house in question is immaculate: there are no stains, no trace of DNA, no evidence the rug has been replaced. Everyone doubts Connie, believing she imagined it. Is she losing her mind? Or is something more malevolent at play?

Lasting Damage, Sophie Hannah’s latest crime novel, is exquisitely complex. The experience of reading it is similar to that of putting together a jigsaw puzzle: a daunting, somewhat disorienting task that requires deliberation and precise attention to detail. While this might be said in general of crime novels, Lasting Damage is masterfully crafted. It all fits together perfectly. Hannah’s particular skill is how well she incorporates the psychological motivations of each of the characters while manipulating the reader at the same time. We want to believe Connie, but we also question her sanity. As the story reaches its chilling finale, we learn the truth along with the characters—something not at all expected but, as the last piece is put into place, oh, so satisfying.

Review first published by The Courier-Mail in February 2011.