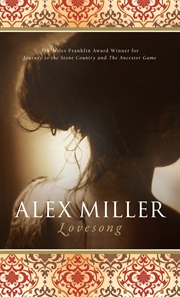 Alex Miller’s beautiful Lovesong is anything but a simple love story.  Ken, a retired novelist returns home from an extended stay in Venice to find his neighborhood changed.  There is a new pastry shop run by Sabiha, a lovely woman with an air of sorrow.  Ken befriends her husband, John, and listens as John tells their story.

In Paris many years earlier, John took a wrong train and then was caught in a sudden rainstorm.  Taking shelter in a nearby café, he met Sabiha, a chance encounter that would change the course of their lives.  They marry, run the café, live happily enough.  However, John always intended to return to Australia and resume his career as a teacher.  Sabiha, feeling that once she moved to Australia she would never leave, refused to go until she was able to take her child to Tunisia to meet her father.  However, the two remain childless—and in limbo.  As time passes, John’s regret over his failed plans is matched in intensity by Sabiha’s terror of aging.  When she learns her father is dying, the idea that she might die childless becomes unbearable.

This personal crisis is set in the larger complex situation of two people from different cultures making a life together in a third.  There is no question that John and Sabiha love each other; nonetheless, they are at an impasse that could destroy their marriage.  There is an elegiac note throughout Lovesong. As usual, Miller’s language is deceptively spare, slowly building in emotional power.  The climax, while not unexpected, is deeply moving.

As Ken listens to John tell their story, he finds himself irresistibly drawn to its narrative possibilities.  Lovesong becomes more than a love story; it becomes a novel about the nature of stories.  For Sabiha, a story is about company.  For John, it’s an act of confession.  But it’s therapeutic qualities benefit the listener as much as the teller, as Ken attests.  A story is also a gift.  Ken considers John’s story to be too much a “gift from the gods” for him to pass it up—even when he learns that John has ambitions to write it himself.  This raises the question that is not precisely answered: just who owns a story?

Lovesong is the kind of novel that will have you thinking—and feeling—long after you finish it.

Review first published by The Courier-Mail in November 2009.