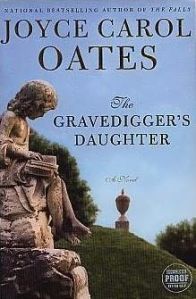 The Gravedigger’s Daughter is the story of Rebecca Schwart, born on a ship in New York harbour to Jewish immigrants on the brink of World War II. The daughter of the local gravedigger in a grim, unwelcoming town, Rebecca grows up socially isolated and starved for affection as her family’s dreams burn out one by one.

This novel touches on many of the themes that have consumed Oates throughout her long career: identity, violence towards women, survival at all costs. Her heroine Rebecca finds subtle, cunning ways to deny her past in the grand sweep of a world caught up in its own denial. Cheating death, she forges a new version of herself as Hazel Jones, designs opportunities for her talented son, pushes upward, utilising her beauty and natural charm. There’s a shadow, however, a double that follows her all her life and, with it, a terrible emptiness. She must face that the mask she adopted to survive isn’t who she truly is, and it’s too late to go back.

In an interview, Oates said her metabolism feels ‘right’ when she’s running long distances. My impression when reading her works is exactly that: there’s speed, distance, a raised heart rate and shortened breath and tensed muscles; there’s the landscape streaking by; and, ultimately, there’s wild exhilaration, breathless accomplishment, and a sense of genuine well-being.

Hold on and enjoy.