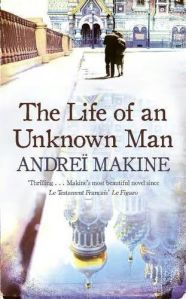 Andreï Makine’s latest novel The Life of an Unknown Man, is breathtaking in its humanity and tenderness.  It uncovers Russia’s past in layers, as a disillusioned exile returns home to a city hurtling towards the future.

Shutov, a middle-aged writer of middling success, finds his life being dismantled as his lover, the much younger Léa, moves her books and furniture from his modest Paris flat.  He’s a failure, a joke.  Even his name, Léa reminds him, means ‘clown’.  You’re only half-right, he throws back, it means ‘sad clown’.

Steeped in the literary traditions of his native Russia, which he left during the Soviet period twenty years before, Shutov believes his country’s literature is his only true home.  A story by Chekhov recalls a moment in his own life, when he failed to declare his feelings to his first love, Yana.  On an impulse, he tracks her down, buys a ticket to St Petersburg, and finds himself in the middle of the city’s tercentenary celebration.  It turns out the new Russia is unrecognizable, and Yana has no time for lost love.

Disoriented, Shutov encounters an old man who tells him a tale of the city’s siege, battles at the front, Stalin’s purges and, most importantly, a love story that transcends all.  Volsky’s story transforms Shutov, remakes him both as a Russian and a writer, reveals the wisdom of simple happiness.

The reader’s experience is similar to Shutov’s in this life-affirming novel.  I found myself staring off at the Russia Makine evokes; and when I returned to the moment, everything around me looked different—richer, lighter, more real.

The Life of an Unknown Man, Andreï Makine, Hachette.