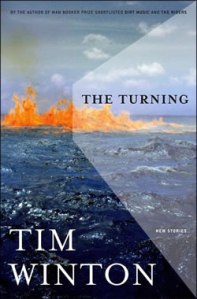 Years ago I accompanied a friend to a dance performance in New York City. A dancer-choreographer from California, she’d come east especially to see the Merce Cunningham Dance Company. They danced to John Cage’s three note composition 4’33”. From my point of view, there wasn’t much going on. The performers padded onto the stage, took a position, and maintained it for the duration of what seemed to me like mostly silence. I sat bewildered, but my friend leaned forward in her seat transfixed. She gasped at times and at the end applauded rapturously.

“That’s as close to technical perfection as the human body can get,” she whispered.

Reading The Turning by Tim Winton, I had an experience similar to my friend’s: eager, at times gasping, enraptured. Winton’s writing is as close to technical perfection as the written word can get. Like the Merce Cunningham dancers were to my friend, I found every page of The Turning a masterclass in technique. And yet there’s nothing fancy or inaccessible about his stories. They are familiar and real.

The Turning is a collection of short stories, all loosely connected though each is written in different voice and perspective at varying points in time. I’ve heard that Winton writes each story several ways before settling on the final version, an approach that’s evident here. One story, for example, is written in the first person when the character is a boy; there’s also a story about him written in the third person many years later; yet another gives a stranger’s view of him as a teenager during a bus ride.

These multiple perspectives raise some interesting questions. ‘What do we know?’ and ‘how do we know what we know?’ are two that wind their way through this work. Children’s lives are full of things they don’t understand, Winton says over and over. “Something important [is] out of reach, the way everything is when you’re just a stupid kid and all the talk is over your head”.

Winton is most interested in getting to the moment in someone’s life when understanding dawns, sometimes in a flash, sometimes slowly and painfully. In one story, an unnamed character faces his role in a tragic accident and comes to realise “The past is in us, and not behind us. Things are never over.”

Such moments of understanding arrive, but not until there have been many moments of misunderstanding and misinterpretation. Vic, a troubled teenager, observes: “Everything you know and all the things you half know hang on you like the pressure of sleep.” When the moment of understanding does arrive and is finally recognised, it brings an opportunity for change — a turn in the course of a life. Many of these stories offer this kind of turning, but always at an emotional price. (And sometimes at a physical price —The Turning is full of amputations and disfigurements.)

For some, the chance arrives late. Vic, as a grown man, reflects, “I’d had years of boyhood bewilderment…In the end there was only a closed-down resignation, the adult making-do that I’d grown into.” Vic feels as helpless at forty-four as he did as a boy and still doesn’t “know the first thing about saving himself.” Then, the unexpected occurs, the tiniest event on the least likely of days; with it, hope.

Like an incoming swell (and real life), these stories rise, break, fall, churn, and drag with violence, drawing one to the breathless dark, tossing one up to the surface just in time.  There is desperation, sure, but these stories reveal the emotional beauty and the fraught delicacy of the human struggle for understanding.

As the reader in me closes the book, there are sighs and goose bumps and a tingling at the back of my neck. The writer in me stands and applauds.