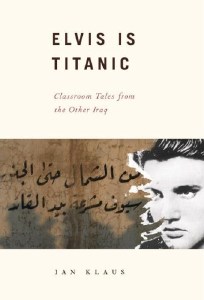 Ian Klaus is a New York-based, soccer playing, former Rhodes Scholar now studying for his PhD in international history at Harvard. In 2005, at the age of 26, he left this busy life to teach English at Salahaddin University in Iraqi Kurdistan. Impressively, he entered the region in the company of the US Diplomat, Peter Galbraith. He was also assigned two full-time body guards—but then, Iraq is a dangerous place for Americans.

Klaus began writing in the evenings as a way of coping with the sudden lack of media. Elvis is Titanic is the result of this practice. The stories he presents are neither analysis nor objective reporting but thoughtful commentary on a culture very different from his own.

Simultaneously embraced with open-heartedness and viewed with deep suspicion by a population for whom war is an everyday experience, he writes of inevitable cultural collisions and skewed perspectives on both sides. Even in the toughest moments, however, Klaus remains compassionate.

Like many who travel to remote corners of the world, Klaus is most struck by how much American culture is present. Elvis, Hemingway, Oprah, and even The National Enquirer figure in his anecdotes. This is the book’s real story, particularly when photos surface revealing Klaus to be Chelsea Clinton’s boyfriend. Sadly, it becomes too dangerous to remain in Iraq. This small fact could have just as easily hijacked the book. Kudos to Klaus for his self-discipline: while he accepts the company of Galbraith and the protection of bodyguards, he resists trading on the Clinton name.

Review first published in The Courier-Mail in 2008.