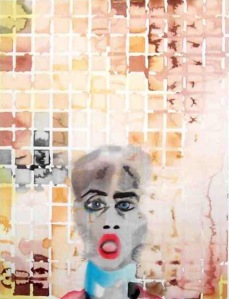 Saturday AM At Brisbane’s spanking new Gallery of Modern Art, I chat with a gallery employee who tells me he’s just discovered Gabriel García Márquez. Since Márquez is one of my favourites, I quickly ask, “Which novel are you reading?” “Oh, not a novel,” he answers with a polite curl of the lips. “I don’t read novels. I’m into real-life stories. It’s his memoirs: Living to Tell the Tale. All about how he used his life in his work.”

That’s enough for me. Even if I didn’t have a superstitious belief that I’m meant to read books strangers tell me about, I’d want to read this one.

Saturday afternoon Back in the city with time before my train, I stop in a bookstore and look for Márquez’s book. There’s one copy left. Is it another sign?

The streets are crowded, but rushing I make the train and collapse into a seat with a window.  I slip the book from my bag and read the comments on the cover. Impressive praise: “Márquez’s greatest book….” “A marvellous journey…never less than fascinating.” “Pure enchantment.” “As a reading experience it is completely magical.”

The title itself—Living to Tell the Tale—is intriguing. It captures a continuing action: Márquez hasn’t only lived to tell the tale, but he is even now living and telling. There’s an invocation at the front of the book: “Life is not what one lived, but what one remembers and how one remembers in order to recount it.”

There’s a difference between a memoir and an autobiography. While an autobiography chronicles a life, giving weight to all aspects, a memoir tends to recount a particular episode and offers a uniquely personal perspective. Gore Vidal writes “a memoir is how one remembers one’s own life, while an autobiography is history, requiring research, dates, facts double-checked.”

Saturday evening Before abandoning TV for books, my children flip through the channels. It’s one reality show after another, the so-called ‘real life’ stories my new friend at the gallery prefers. I know someone who works on one of these shows. She often laughs about how much rehearsal goes into making it seem spontaneous and tells stories about the lengths people will go to just to be on TV.

Over 6000 Australians turned up at casting calls for The Biggest Loser. Each one was willing to put on a body-hugging unitard and hop on scales in public. What’s worse are the numbers of people who tune in to watch—one million in Australia alone. Nowadays, everything is deemed worthy of attention.

The ease of email, MySpace and YouTube allows every insignificant aspect of our lives to be put ‘out there’. We read about the democratisation of media as if it’s a good thing, but to me it feels more like wandering through a rubbish tip looking for something—anything—of value.

There seems to be a parallel with the situation in the latter half of the 20th century. Then, any accident was seen as a boon: one need only sue to raise a little capital. Now we bypass the courts. Anything that happens becomes a story, and the way we make money is to sell it. Recently, when a mine collapsed in Tasmania, the survivors had deals to sell their stories before they were even rescued. It didn’t surprise anyone.

Writing one’s memoirs used to be an opportunity to enhance one’s reputation for posterity, to contribute one’s own point of view of events to the historical record, and a chance to solidify one’s persona. Statesmen, generals, artists and literary figures alike kept the idea of writing their memoirs as a project for their retirement from public life. Today, people write memoirs as a way of entering public life.

A former drug addict who worked for a decade as a prostitute to support her habit recently made a successful literary debut writing a memoir about this period in her life. While her story seems to be essentially true, others written in the same confessional mode and covering similar terrain have been revealed to be only loosely based on true experiences. We’re all familiar with the cases of James Frey, Norma Khouri, and Helen Demidenko, authors who sought fame and fortune by representing their fiction as ‘real-life’ stories.

Perhaps some of the problem is that just like with television, there’s a perception in the publishing industry that only these stories sell. And just like reality TV producers must rehearse really hard to give the impression of being natural and ‘true’, authors are feeling the same kind of pressure. Would an account of overcoming drug and alcohol dependence have become a bestseller if it was published as a novel? Would it have been published at all? True stories of a anti-Semitism, ‘honour’ killings, and prostitution are considered much more powerful than imagined ones.

These cases are at the edge of something that smacks of cultural neurosis. Everyone has a story to tell (or thinks they do). To some degree or another, we are all media savvy. Growing up, TV was our pabulum; today, the sophisticated delights of the internet are our tapas.

The climate of creative production is harsh. Works nurtured in the hot-house of imagination appear to be given little opportunity to thrive while common weeds actually seem to be cultivated. It’s only natural—isn’t it?—for imaginative writers to exploit the media in order to sell their ideas and make a living. If publishers are only looking for non-fiction, for memoirs and real-life stories, writers are going to feel the pressure to produce just that, even if they have to take ‘literary license’. I’m not excusing Frey, Khouri or Demidenko. I’m challenging the publishing industry to take a balanced approach and to offer a greater variety of opportunities to writers.

There are dozens and dozens of practicing writers who have nothing to sell but hard work, steady focus, good ideas, imagination and well-crafted manuscripts. They aren’t representing their work as something it isn’t. But emerging writers can’t even get agents to look at their work and, without an agent, it’s nearly impossible to interest a publisher. I suspect more than a few very good works are languishing in drawers. The machinery around the written word is just as shallow as it is around television. And this is a really sad state of affairs.

The only thing that gives me hope is that good work seems to outlast public indifference. I take heart that some unacknowledged writers will continue to work outside of the machine, purely for the love of writing. And that these works will someday rise above the trends and fads, purely from merit.

Sunday morning, 5.00 AM I creep down the stairs, clutching Márquez’s book. It won’t be long before a rosy light appears in the window and the laughter of kookaburras heralds a new day, but for now there are a few precious moments of stillness, some lovely solitude with a great book. I melt into the sofa cushions and read stirring evocations of the past, events that are familiar to me because I’ve read the novels Márquez has written.

There is a beautiful symmetry here. In the memoirs, we have pieces of his remembered life. Then there is the body of his fictional work, which offers another way of looking at the memoirs. Exploring the two together gives a glimpse of an imagination in action.

Anyone can keep a diary of daily life, the glorious disorder of ordinary comings and goings, like the few jottings of mine here. With detailed research, facts may be unearthed and laid out in the form of biography and autobiography. And of course, anyone can exploit the experiences life offers.

But memoir is different. It’s looser, more fluid. More than anything, it’s a reflection and, within the reflection, a tacit admission there are gaps and distortions, that memory may end up as moth-eaten as a wool jumper. Writers need to exercise integrity when they write life stories, underscoring how memory’s played her tricks in every step of the telling.

To me, a really interesting memoir presents the complex layering of life with memory, remembered life with how one remembers. This takes wisdom, many years lived, a depth of thought, and a dedication to unravelling wild tangles.

I recall something that Bob Dylan once said about songwriting: “There’s no sense of time. You’ve got yesterday, today and tomorrow all in the same room, and there’s very little you can’t imagine not happening.”

I suspect the same is true of memoirs. I want ‘real’ stories just like everyone else, but in this climate, when memoirs are often falsely packaged as ‘the real thing’, I’m going to be careful about which ones I read.