To the Right Honourable Lord Mayor:

We are currently hosting an exchange student from America and have enjoyed showing him our corner of Australia, billed by you as the country’s “most liveable”.

Two weeks ago, he planned to meet some friends in the city for a movie on the same night as my daughter, who is his age, had a rehearsal for a school concert.  Ordinarily, my teenage kids and their guests are independent and use public transportation to get around.  On this occasion, however, since my daughter was going in another direction and our visitor was still unfamiliar with the city, I weighed it up and decided to brave the traffic and drop the young man at Queen Street before looping around to my daughter’s school.

As I approached Albert Street, I slowed, uncertain where to pull up.

“There’s Borders,” he exclaimed happily, “and Hungry Jack’s is over there.  I know exactly where I am.”

Magically, the light at the intersection turned red; our young American jumped out with a smile; moments later the light turned green, and my daughter and I continued on to Spring Hill.

A week later, I received a $120.00 fine in the mail.  Apparently, I was “impeding the flow of traffic in a clearway”.  At a red light.  When traffic was stopped.    Apparently, too, and most disturbingly, it is a law in this city that those entrusted to ‘keep the peace’ can also write out tickets whenever, wherever, without any contact with the so-called offenders, and conveniently stick them in the mail.

I stared at the ticket and thought of Big Brother.  Or perhaps there’s an invisible traffic god on Elizabeth Street. 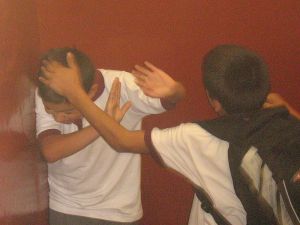 The next day, my fourteen year old son was at a nearby suburban mall when an older boy threatened to ‘jab’ him unless he ‘payed up’.  My son ordinarily doesn’t have much money on him, but that day he did.  He gave the bully $50.00 he’d gotten for his birthday.  My son later told me  he thought he’d better, since the same punk had beaten up a friend because his wallet was empty.

When he heard the story, our exchange student, who happens to be from an area just outside New York City, was wide-eyed and appalled.  “I know stuff like that goes on in America, but it never happened to me or anyone I know.  And I live in a pretty rough place.”

I made an appointment to discuss the incident with the police.  After all, I don’t want my son to walk in fear; neither do I want any other child to be so intimidated.  I had to first pick my son up from his school.  Coming from an unfamiliar direction on back roads, I was peering at street signs, occupied with the idea I needed to cross train tracks but uncertain how to do so.  Perhaps I didn’t signal enough ahead of my left turn, but the next thing I knew, I was being pulled over by a traffic officer on a scooter.

I don’t remember much of the conversation.  At first, confident I had done nothing egregious—I wasn’t speeding or weaving erratically—I welcomed the chance to speak to a knowledgeable representative of Australia’s most liveable city.  As the officer approached my car, I had the expectation he would politely tell me I should signal more in advance of a turn, or that I had a burned out tail-light, or something else of little consequence.  I would thank him for the information, then I would ask for directions on how to cross the railroad tracks, he’d tell me, and we would say good-bye.

Within thirty seconds, though, he had demeaned me in tone, words and manner, and I was using all my energy to hold back tears.  He asked me for my driver’s license.  I reached into my wallet and gave him the card.

In my haste, I had given him my university I.D.  I dove back into my wallet and scrambled to find the license.

With that, I’d had all I could take.  I began to explain about the bully at the shopping mall who extorted fifty bucks from my son, and the constable I was on my way to meet, and how I didn’t usually drive to my son’s school the back way, and that I didn’t normally get pulled over, and that I didn’t even know why I had been pulled over.  And because I was emotionally distraught over the situation with my son, facing this bullying officer of the law, the floodgates opened.  I’m ashamed to say, I began to cry.

He cleared his throat.  “Well, take some deep breaths and get your son then.”  With that, he backed away, got on his scooter, and cruised off.

I sat there bewildered.  I looked into my lap for a ticket, but there was none. (Of course, that in itself is not meaningful; it’s conceivable one will arrive in the mail.  But at least, then, I will know what I did wrong.)

While I calmed down, a few cars snaked past, the drivers sending sympathetic looks.  I realised then the officer had pulled me over in such a way that we had been blocking the road.  If I had done that on my own, the great eye of the traffic god would most certainly have turned punishing, but the cop on the scooter seemed to care nothing about impeding the flow of traffic.

I meandered for awhile, found the way across the tracks and up the hill to the school; my son was waiting.

He looked at my face.  “What happened?”

I added, “You know, it doesn’t make sense.  The constable I spoke to this morning, the one we have the appointment with, has been so nice.  But the guy on the scooter was nothing but a big bully.”

“Yeah,” my son answered with a note of worldliness, “they just send those guys out to get money.  You crossed his path, so he stopped you. He was going keep talking to you until he found something to give you a ticket for.  That’s how they do it.”

Considering the errand we were on, it wasn’t difficult to see the parallels.  We drove the rest of the way in silence. 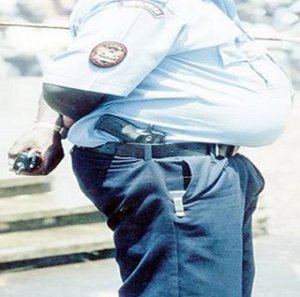 At our family dinner that night, we spoke about justice and intimidation.

“There has to be a reason to pull someone over in America.  Just cause.  Otherwise, they can’t,” our American contributed.

“Just forget about it,” my husband recommended.  “It’s simply a revenue stream for the city’s coffers.”

“What good are my ‘contributions’ if I’m afraid to drive there because of mercenary laws and cameras that double as ticket printers.  There’s no available street parking, parking garages are exorbitant, which would be okay if public transportation ran frequently, but it doesn’t.  You can’t even drop anyone off.  And you can get pulled over, not be told why, and be badgered until you cry.”

“You can’t enjoy a place if you can’t get there,” someone said.

“Or if you’re afraid of being punished when you are there.”

“Like the bad kid at the shopping mall,” chimed the baby of the family, who shouldn’t know about this at all. 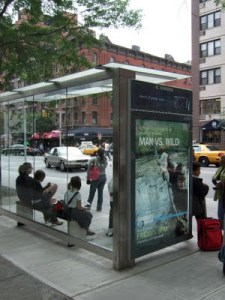 That was three nights ago.  My daughter just called from the bus stop where she and our American exchange student have been waiting for more than twenty minutes.  The bus hasn’t come and the next one isn’t due for nearly an hour.

“We were ten minutes early, just to be safe,” she exclaims.  “And now I’m going to be late for my piano lesson.”

I agree to pick her up.  I have no doubt, when I pull over and these two exasperated teenagers hop into the car, I’ll be doing something wrong.  I catch myself hoping it’s the Orwellian traffic deity and not the legally empowered bully on the scooter who spies me in my crime.  And then I recognise that cowardly wish is against every democratic principle I believe in; and I understand that the invisible authority and the strongman are parts of the same machine; and I realise it’s time for me to speak out.

Perhaps not so much as you advertise, Lord Mayor.  I keep wondering what our guest will say about Australia when he returns to New York.