Addicted to love: clinging to the narrative of the romantic hero 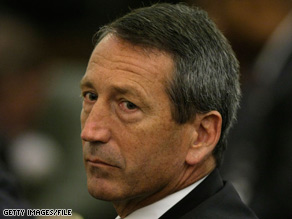 When the story about Mark Sanford’s affair first broke in June, I happened to be researching the idea of romantic love.  Naturally, considering the nature of the material I was reading, I had a few observations to make about Sanford’s actions and motivations. At the same time, I kept thinking: in a landscape populated with highly positioned men who risk careers, marriages, and reputations through sexual recklessness, surely no one is interested in another such mundane case.  I decided not to write about him.

It’s several weeks later, however, and the story hasn’t gone away.  People are interested, which I find interesting.

For those who don’t know, the plot begins like a Hollywood thriller:  The Governor of South Carolina is missing. He’s left no one in charge.  Members of his staff tell the media the Governor is out hiking alone on the Appalachian Trail; behind the scenes, they frantically try to locate him. Even Jenny Sanford, his wife of 20 years, does not know where he is for sure. She claims she’s not too concerned, but it’s Father’s Day weekend and the couple have four sons.  His absence is more than just a little odd.

Then, like a good thriller, the plot thickens. Based on a tip they received months earlier that the Sanford might be involved with a woman from Argentina, The State, a local newspaper, send a journalist to meet flights arriving from South America.  Sure enough, Sanford disembarks from one.  In what can only be a combination of surprise, jetlag, and emotional strain, Sanford admits to the affair.  The next day he gives a tearful, rambling press conference, full of remorse and promises to make amends.  He has since given other statements and spoken in depth with journalists from the Associated Press.

This is where things get juicy: Each day, Sanford’s words take on a more urgent tone, more extreme language, and expressions of deepening emotional turmoil.

It’s the usual stuff.  He claims to have “fallen in love”, met “his soul mate”. He never “meant for it to happen, but it did”. This thing is “bigger than he is”.  He understands he’s “hurt a lot of people” (significantly referring first to his lover, then to “Jenny and the boys”).  He wants “to fall back in love with his wife” but is well aware “it will be a long road back”.  He’s “sorry”, but “the heart wants what the heart wants”.

These statements have been labelled in the media as “erratic” and “increasingly bizarre” and a “public relations nightmare”.

Perhaps it is as simple as this: in an effort to distinguish himself from men like Elliot Spitzer, the New York governor who resigned over the use of call girls, and John Edwards, the one-time presidential hopeful who was engaged in a tawdry affair (even fathering a child) while his wife was undergoing treatment for cancer, Sanford has committed himself to the ‘grand narrative’ of romantic love.

There is no doubt Sanford believes in the story he’s wrapping around his actions.  He appears to be truly suffering.  What is also interesting, however, is that the media seems to be buying into it as well.  The Daily Beast columnists have come out in favour of Sanford and his grand passion. Others have pointed out that since he seems to be “really in love”, everyone should just leave him alone.  Conservative family organisations have remained unusually quiet on the subject, consideration they have not extended to other politicians in the same situation.

Why should this be the case? Why is the idea of romantic love so potent?  Why should the husband who betrays his wife and destroys his children’s happiness be excused by his claim that he has “fallen in love” with another woman?  Why do we make the distinction between the public official who visits a prostitute on his own time (bad) and the public official who, on state time no less, rushes off to a foreign country to visit a woman he claims is his soul mate (not good, but somehow less bad)?

Of course, from the fairy tales we first encounter in infancy, we are all raised on the powerful narrative of romantic love.  Later, when we experience it firsthand, it’s even more compelling.  (Wow, we think, so this is what all the fuss is about.)

Dr. Robert Sternberg, the dean of the School of Arts and Sciences at Tufts University, has been studying love since the 1980s, and notes that the logical psychological theories about love—including his own—are at odds with the way people actually think about love: most people seem to see it as story-based.

“I am interested in the fact that people seem to relate strongly to love stories,” he says. “They seek them out.”

Such stories appeal to us on a fundamental level: the experience of romantic love is pan-human even though it may be expressed and responded to differently in different cultures.  Also, people everywhere acknowledge the huge difference between impersonal intercourse and the intoxicating state of romantic love.  But the difference doesn’t exactly help Sanford’s case.

The state induced by romantic love is physiologically akin to a drug-induced euphoria. In fact, the same parts of the brain are affected. Love lights up the caudate nucleus because it is home to a dense spread of receptors for a neurotransmitter called dopamine.   The brain of the human being in love is dopamine-drenched.

Researchers have also found that levels of serotonin in the blood of those suffering from obsessive-compulsive disorder and the blood of those who claim to be in love are 40 percent lower than those in normal subjects. This means that love and obsessive-compulsive disorder could have a similar chemical profile, which implies that love and mental illness may be difficult to tell apart.  Additional psychological effects of he state of romantic love include: obsessive thoughts, dependence, inability to sleep, think clearly, reason.

If Sanford was smoking pot or drinking heavily, would he still be qualified to govern?  Of course not.

It wasn’t so long ago, in fact, in America, the UK, and elsewhere, that a politician who admitted to having even tried marijuana (whether or not he inhaled) lost his reputation, his credibility, and often his career prospects.  And yet, the ‘romantic lover’, whose brain is in a comparable chemically altered state, is excused from scrutiny and judgment and is even offered protection by the public and the media.

At last report, Sanford has refused to resign his job as Governor and is committed to rebuilding trust in his marriage (even though Jenny and the boys have moved out of the Governor’s mansion “for the time being”). As he shambles about the lonely halls after his staff have left for the day, does he ever wonder if he should chuck it all and run to Argentina?

It’s probably best he resists the urge.  There is a natural end to the brain-transforming hormones.  The “heart wants what it wants” but only, it appears, for a limited period of time: romantic love lasts between six months to three years, with an average 18-month expectancy.  Unlike with drug or alcohol addiction, rehab is not necessary.  And everyone knows, relationships that begin as affairs have a 90% chance of failure.

The good news is that recent research has found that those in long-term relationships need not look back on their first months together as something that they will never again experience together.  It’s possible for partners to fall in love over and over.  (Whether this is of interest to Jenny Sanford remains to be seen.)

the stories we tell

The narrative of the romantic hero is one that Sanford depended on as he wrote emails to his paramour.  When he was caught out, he invoked it in his confession to the world and inflamed it in subsequent statements.  He has depended on others embracing the narrative along with him.  And this has happened, showing how culturally potent the grand narrative of romantic love is among us.

But this is not the only narrative Sanford puts forward to justify his actions—he also aligns himself with King David of the Old Testament.  In response to calls for his resignation, Sanford spoke about “moral absolutes” and God’s law, invoking King David, who “fell mightily, fell in very, very significant ways, but then picked up the pieces and built from there.”